On the drive to Dharamshala the landscape changed from the flat fields, green with wheat, to the mountain valleys of Himachal Pradesh at the base of the Himalaya Mountains. Not long after we started the climb into the foothills our driver pointed to the granite peaks capped with “ice.” After being in the industrial dirt and smog haze of Punjab, the quaint farms tucked into the river valleys and the lush forest foliage, and the clear air were a welcome relief. 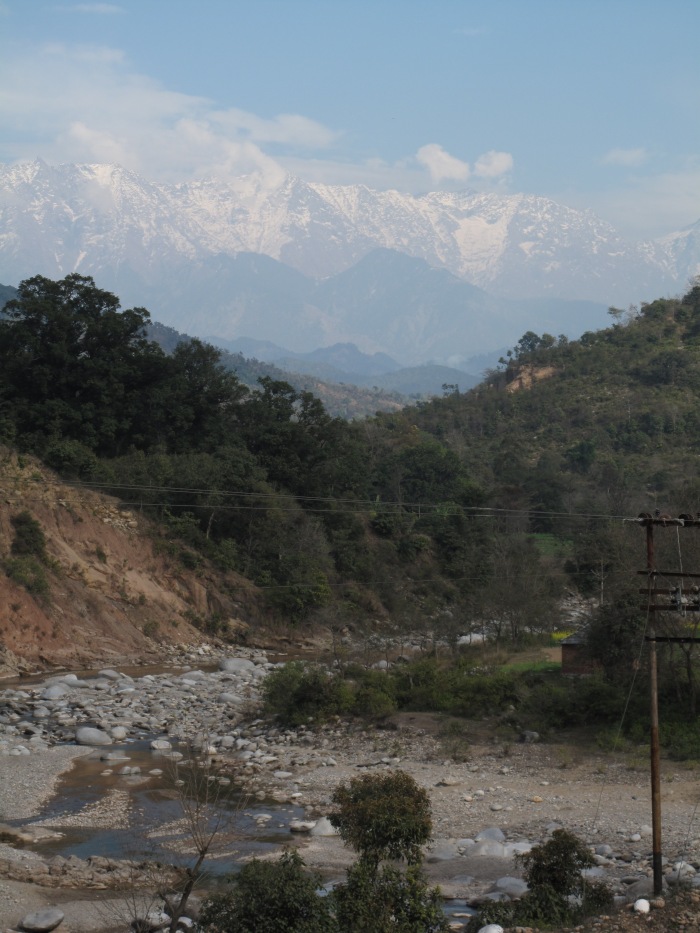 On the Drive to Dharamshala 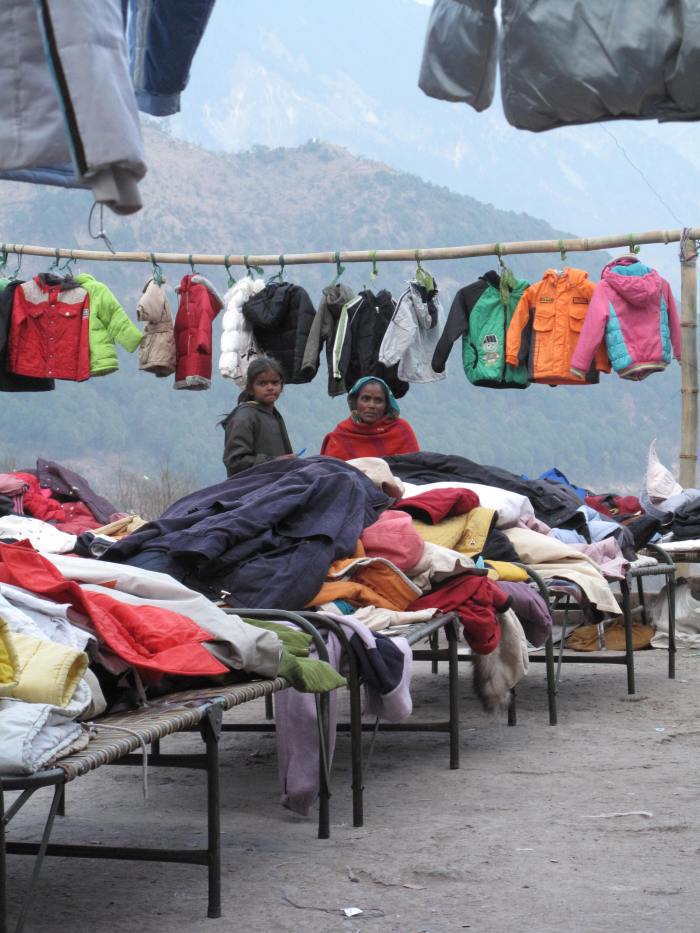 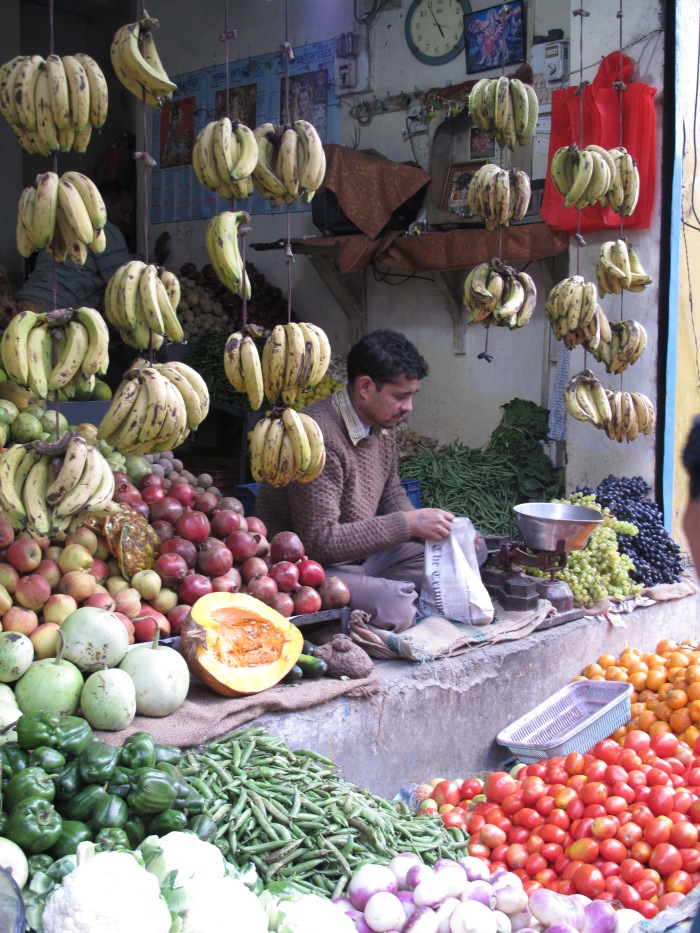 Dharamshala is famous for being the home of the Dali Lama who moved there after he escaped from Tibet. The Dali Lama lives above Dharamshala proper in the town of McCloudGanj, which has stunning views of the mountains and the hazy valleys far far below.

Along with several Buddhist temples, the streets are lined with zillions of Nepal/Tibet shops and vendors selling statues and prayer beads. The addition of several internet cafes, bars, and western coffee shops make McCloudGanj the most Western town I’ve been to in India – including Delhi. I saw more tourists than Tibetan monks in the brief time I was there and I wasn’t surprised that the first person I met at our guest house was a girl from Boulder, Colorado.

The Dali Lama was in residence, but on a retreat until Chinese New Year (February 14), so we did not have the opportunity to see him while we were there, but we toured the temple and the Tibetan museum. The temple was fairly simple with the exception of the elaborate alters to Buddhist deities, especially Kalachakra Buddha, with three faces and close to one-thousand arms (or so it appeared). All the golden deities sat surrounded by elaborate offerings. Unfortunately photography was not allowed because a picture would have been way better than any description I could write, but my favorite offerings were the neatly stacked boxes of cookies which included Chips Ahoy and Oreos.

The Tibetan History Museum was the most affecting part of the temple. It documented the suffering of the invasion of Tibet by China and the suffering of the Tibetan people, which has been quite extreme. There are now more Chinese in Tibet than Tibetans and people are still attempting the dangerous mountain crossings into Nepal and India to become refugees. Tibet is also changing because of the warming of the atmosphere. The glaciers at the roof of the world are melting because of Global warming. For the few nomads that remain, their way of life will change as the atmosphere continues to warm. A newsletter written by the Tibetan Women’s Association that I picked up at the temple discussed Tibet’s role at the United Nations Climate Change Conference in Copenhagen on December 15, 2009 where protesters representing Tibet wore yak masks. www.tibetanwomen.org. 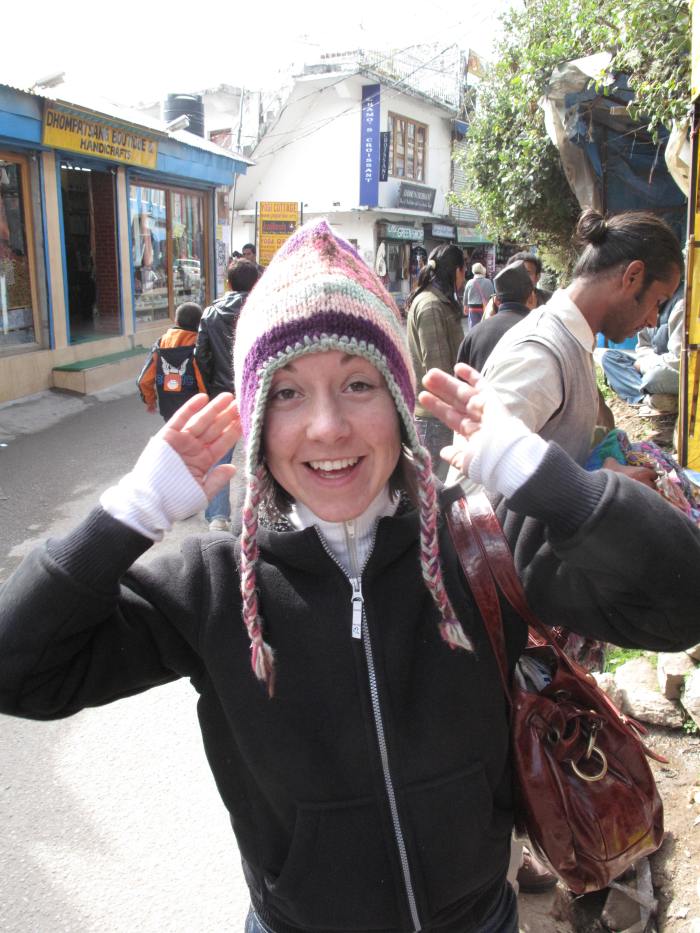 Shopping for a Hat

Later in the day we walked a couple of miles to view the waterfall above the town of Bhagsu, rushed back to town for a two hour long yoga lesson, then went back to the guest house where we had a cooking class with the owner of the guest house, Mona, who taught us how to make momos – Tibetan dumplings. We ate the fruits of our labor with Mona and her husband, Arun, with a couple of Foster’s (Australian for beer) and they talked with us for a long time about the differences in cultures between Asia and the West. They really poured their hearts out to us. By the end of dinner we had made new friends.

It was a long and eventful day in McCloudGanj and we were very sad to leave the next morning.

One thought on “In India Again – Dharamshala”