Two days before the Running of the Bulls at the Sanfermines Festival in Pamplona, Spain, PETA stages a protest against bullfighting, which is the fate of the bulls that participate in the festival.

(I would like to extend a big thanks to the Culture and Animals Foundation for awarding me a grant that allowed me to travel to Spain to research bullfighting in contemporary Spanish culture. It was an experience I won’t soon forget. I will also take the opportunity to apologize for the neglect of my blog this past year. Starting graduate school and my own business took time away from my research on cattle. More posts on Spain soon to follow.)

Most people identify Pamplona, Spain with “The Running of the Bulls,” a crazy event that is part of the week long Sanfermines Festival, which draws thousands of tourists to the city to partake in one of the largest displays of dare devilry in the world. Many people do not realize the bulls that run in the encierro (Spanish phrase for the run) will end up being killed in the bullring later that same evening. Few of the tourists I met in Pamplona realized this fact. Most people were there for the massive 204-hour party that consumes Pamplona during the festival. One million people visit Pamplona during the week and between 4,000 to 1,500 people a day (mostly men) partake in the bull run. Only a couple foreigners I met knew about the fate of the bulls, and those tourists had been to the Sanfermines before.

In honor of the martyred Saint Fermin, the first Bishop of Pamplona and co-patron of Navarre, the Sanfermines festival has a long history, dating back to the 1400’s. Bullfights or bull baiting have been a part of festivals in Spain for centuries-much like a rodeo is part of a county fair in the United States. Historically, bulls would have been herded to the edge of a town and kept in pens during a festival. Early each morning the bulls would have been quickly herded through the sleepy city streets to a main square or bullring before many people were awake. As you can imagine, men looking for a little extra excitement in their lives began to run in front of the bulls during these early morning village cattle drives.

Running with bulls happens in other festivals in Spain, but Pamplona is by far the most well known and well attended.

While trucks, trailers and lories have removed the need for a city cattle drive, bull runs are not an uncommon experience in modern Spain and bull runs takes place in other festivals throughout Spain every year. Thanks to Hemingway, who made the Sanfermines known to the world when he wrote about it in newspaper articles and the novel Fiesta (published as The Sun Also Rises in the United States) Pamplona is by far the most famous bull run in the world.

It is often overlooked in the media that the bulls who draw thousands of people from around the world will be killed in a bullfight later that day. Tourists don’t always connect the dots between the running of the bulls and the bullring. Nor do many tourists in Spain even know that at the end of a bullfight a bull is killed with a sword thrust in between the shoulders. Almost all of the Americans and Australians I met at my youth hostel in the days before the festival (and other tourists I met elsewhere in Spain after the festival) were oblivious to this information and most were a little alarmed by it. For this reason People for the Ethical Treatment of Animals (PETA) stages a protest every year to draw attention to the realities of bulls at the Sanfermines festival.

The majority of people attending the festival just want to party.

The protest, called “The Running of the Nudes,” happens two days before the first Encerino to draw awareness to the fact the bulls will be killed in a display of public execution during the bullfight as well as the connection between tourists and the bull fighting industry in Spain.

To anyone raised in Spain, Portugal, Southern France, or Latin America-where bullfights occur-it may seem obvious that at the end of a bullfight a bull is killed. But I can sympathize with those who are in the dark about the fate of fighting bulls. The images used to portray bull fighting are usually images of a lone matador with a black bull charging through his cape. The focus is on the art of the death defying passes in which a bull comes within inches of a matador. The bull could easily pummel the man, but instead its focus is on the flimsy cape. I’ll describe the bullfight (which isn’t exactly a fight) in another blog, but ultimately the event is orchestrated so that after the matador has tired an already injured bull with his cape work, the bull will (hopefully) be swiftly killed with a sword thrust. But most images that promote or celebrate bull fighting focus on the aesthetics of the matador’s costume, his cape work or the matador himself, and not the actual death of the bull. 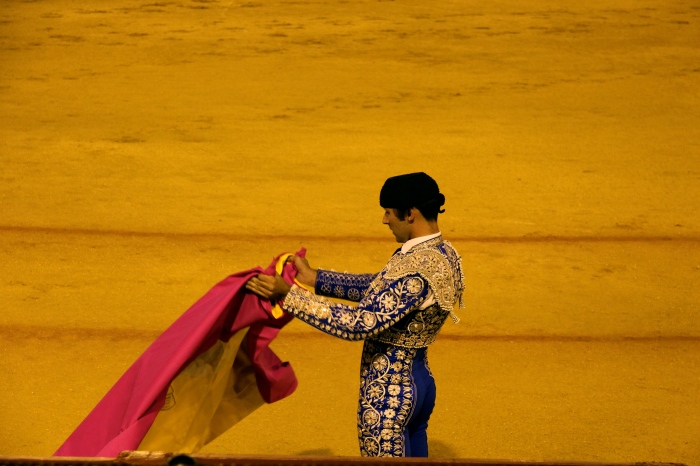 …and not its brutality.

Killing bulls has occurred—in some form or another—during Spanish festivals for centuries and is considered acceptable within the social norms of its culture. To those that have been raised outside of Latin culture, the event can be shock to moral sensibilities pertaining to animal cruelty, torture and many people’s squeamish sentiments surrounding death. To animal rights activists, like PETA, the bullfight is a barbaric event they are working to ban. This skin-baring protest is one way PETA activists are trying to draw attention to the realities of bullfighting in contemporary Spain.

While many of the tourists were upset knowing this information, many were interested in checking out the “Running of the Nudes” protest, not necessarily out of solidarity with Spanish fighting bulls, but rather a desire view the nudes. Five people I had befriended at my hostel came to the rally out of curiosity and also because nothing much was happening that day. One Australian woman was particularly excited to attend because she liked having reasons to de-robe in public. Granted, none of the Australians and Americans that comprised the group were fans of bull fighting after they learned what a bullfight entailed and on a person level they were in support of PETA’s cause.

People gathered to watch the protest.

When we arrived at Town Hall Square we learned there was no “running” and the topless protesters had stopped short of being nude. One group was painted red. The other group painted black and they were standing together looking a little uncomfortable. All the women had their arms modestly crossed over their chests. In years past there had been a march through the streets of Pamplona, but this year they were only creating an installation with their bodies to convey their message of protest. A PETA representative told me they host other nude protests in other cities around Europe to raise awareness for the killing of the bulls in Pamplona where they do march in order to raise awareness amongst potential tourists to discourage them from traveling to the festival in Pamplona and supporting this event with their tourist dollars.

Pamplona’s picturesque Town Hall witnesses many events during the Sanfermines, including the PETA protest. 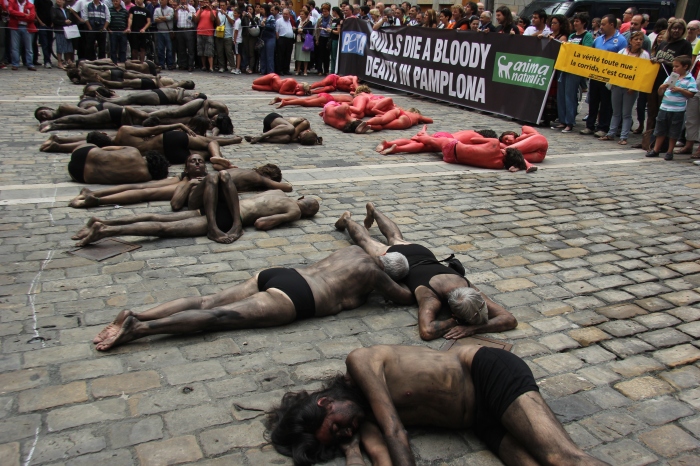 The installation spells out STOP FIGHTS.

Last year the topless PETA protesters created an image of a bull with red blood pouring down its shoulders—as you would see in a bullfight. (You can see this image and others on PETA’s slightly out of date “Running of the Nudes” webpage.) This year they spelled out the slogan, “STOP FIGHTS.” The protest lasted an hour and was very peaceful. At the strike of noon the protesters began to form their installation, those painted red spelling out STOP and those painted black, spelling out FIGHTING. Once everyone was in place those with press passes filled the square. Film crews interviewed representatives from PETA as the still photographers stepped around the protesters taking photos. The most conspicuous interviewer was a 6’3’’ Spanish transvestite entertainer who asked one of the protesters why she had her arms crossed. She was asked in Spanish, “Are you cold?” The rest of us onlookers stood behind ropes that framed the protest. 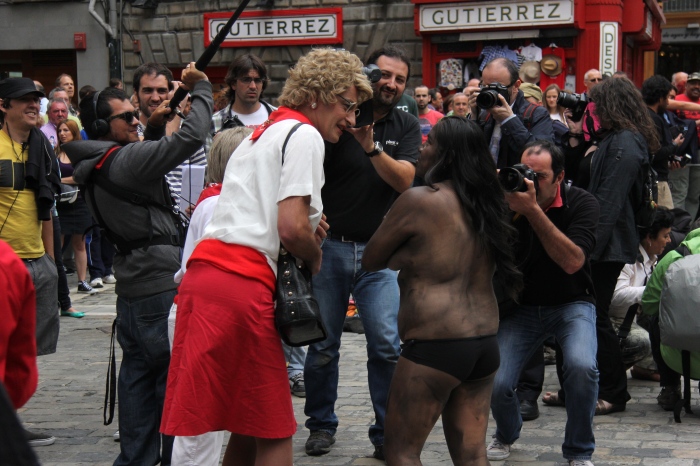 This out of the ordinary interviewer questioned this protester about why she kept her arms crossed, “Are you cold?” she was asked.

While the protest made a statement it didn’t clearly draw attention to the fact that there has been some pushback in Spain and Latin America toward bullfighting. Barcelona held its last bullfight in November of 2011 before Catalonia’s ban on bullfighting went into effect this year (though games with bulls still go on in other forms in the province–including one where bulls horns are lit on fire). The country of Ecuador also banned bullfighting last year. The PETA representative I spoke with quoted me a Gallup poll statistic that 72% of citizens in Spain are opposed to bullfighting. Alexander Fiske-Harrison, a bullfighting afficianado (expert fan) and author of the recently published book Into the Arena: The World of the Spanish Bullfight, reported on his blog that this statistic, which was quoted to me by a PETA representative, isn’t as accurate as it sounds. None-the-less, the protest didn’t provide much information for the locals and tourists that attended the protest out of solidarity, curiosity or happenstance. While those in the media were informed about why PETA had visited Pamplona the rest of the crowd did not leave well informed.

All in all the topless protest was far from racy and kept reminding me of a dream where you find yourself naked in public. Laying on the hard paving stones the protesters simply looked a little uncomfortable and very vulnerable, which may have been the point. Even though fighting bulls are the quintessential symbol of strength and power, they too are vulnerable. Any person who goes to a bullfight sees these animals brought to their most vulnerable moment of all, the moment of death.

Stripped down and laying on stone pavers the protesters looked uncomfortable and somewhat vulnerable.

I did witness a bullfight a few days after seeing the PETA protest and I couldn’t help but think that the nude protest had to be more than just shock value or media grandstanding. While clothes are one thing that may separate humans from the rest of the animal kingdom, the separation is a small one. We are human animals and share many of the mysteries of life and death with other animals. We may better understand how to manipulate a fighting bull into participating in the ritualized brutality of a bullfight—where humans live the majority of the time and bulls die the majority of the time—but both humans and bulls struggle to preserve their own lives. While death is unavoidable to us all, both human and nonhuman animals would prefer not to unduly suffer beforehand. Despite the recent bans on bullfighting in Catalonia and Ecuador bullfighting appears to be alive and well elsewhere in Spain, Latin America and the handful of other countries that participate in it. I’ll be describing bullfighting and its place in contemporary Spanish culture in future blog posts.

Real life death is not usually on display for us in day-to-day life or in our venues of entertainment. This is the moment before the matador’s assistant deals a death blow to a mortally wounded bull’s spinal chord.

3 thoughts on “In Pamplona, Spain – At “The Running of the Nudes””