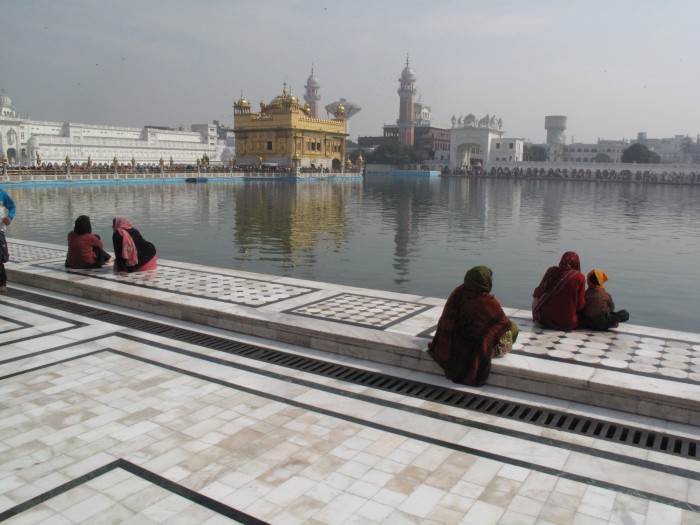 I landed in Delhi at 1:30 in the morning. Less than 24 hours later I was 500 km away in Amritsar, on the border of India and Pakistan. For the first week of my trip I am traveling with Silke, a German girl and a friend of my friend Steve (www.onelovetours.net), who has arranged out trip. We have a Hindu guide, Ganesh, and his friend, Alam, is our driver. They are both nice and since they are not familiar with Amritsar, we all share a similar sense of adventure for the first part of the trip. 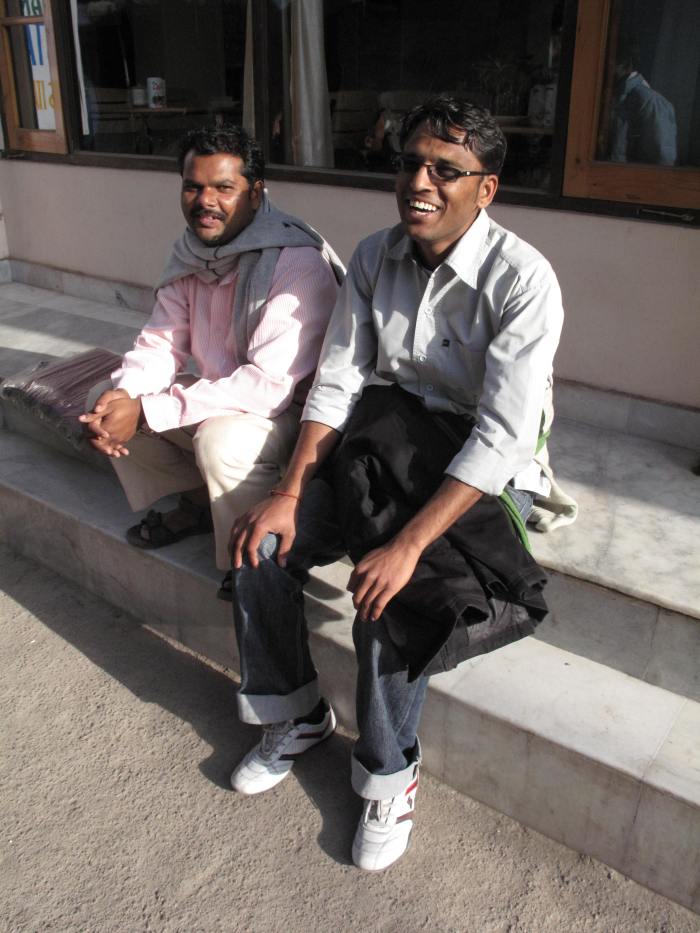 The Sikh comprise only two percent of the Indian population, but they are a visible minority and not merely because of their colorful tightly wrapped turbans. The fact that they are an industrial people was clearly visible on the long drive through Punjab. We passed endless factories (if you bought something with a made in India sticker on it, I might have driven past the plant it was made at) and industrial farms (this region supplies India with wheat and basmati rice – two important staples). Many Sikh join the police or military and police force and they are also known to be shrewd in business in India and abroad.

The drive between Delhi and Amritsar was an overwhelming experience as we passed a river of endless cargo trucks that appeared bursting at the seams with every imaginable thing. The air was so thick with dust and pollution that it was impossible to see clouds move across the sky. To me it seemed that at least half the buildings and roads appeared under construction, and after traveling 500 kilometers, that is a lot of construction. The Western influence is also visible from the freeway. We passed a gigantic two-storey Kentucky Fried Chicken, a sizable Subway restaurant, and the ubiquitous McDonalds (but you won’t find a Big Mac on the menu because they don’t serve beef). I feel sad to see the change in Indian culture, but you might be able to convince me that a Baskin Robbins roadside stand open 24/7 might be a good idea.

Not interested in ordering a bucket of chicken, we ate at the road side open air restaurants called “dhabas”. A dhaba is a fast full service restaurant that serves mainly local cuisine. The Punjab cuisine is famous the world over and sampling the local fare was a true highlight of the trip. Northern Indian cuisine is heavily influenced by Punjabi cooking with a focus on dairy, cheese, and butter. The Sikh use twice as much butter as other Indians. My guide book said the Sikh love butter so much that in Amritsar they sell stickers that just say “butter.” (Sadly, I did not see one). Even though the Sikh love their butter I saw fewer cows in Punjab than anywhere else I have been in India so far. This is because the cows used  for dairy production live on farms (and usually in a walled courtyard) and are not wandering the streets. In Amritsar I only saw a few loose cows chewing their cud on a street median by the fruit and vegetable market. After my last trip through the “cow belt” of India, it didn’t quite seem like India without seeing cows wandering through the streets.

The View from a Dhaba

But cows are not why people travel to Amritsar. The main attraction is the Golden Temple, the spiritual homeland of the Sikh religion because their religion was founded at this sight. Every Sikh is supposed to visit the temple least once in their life. The Golden Temple rests in the middle of a rectangular man-made lake and true to it’s name, it is covered in gold. It is a beautiful architectural structure – comparable in some ways to the Taj Mahal and it is a peaceful place to visit.

The Sikh believe that all people are equal and at their temples they offer everyone free meals regardless of race, class, or economic income. We ate lunch in one of their huge dining halls. It was an amazing thing to see, not merely because of the diverse groups of people sitting next to one another, but to see one thousand people fed at basically the same time. Everyone sat on the floor in long rows and people would come down each row with food. For lunch we had roti (whole wheat tortillas), dal (lentils), channa masala (chickpea curry) and rice pudding. Servers walked down the isles more than once making sure that everyone had their fill. After eating we walked by the preparation area with mountains of vegetables (here carrots), garlic, and massive pots stewing, and possibly the world’s biggest dish pit. Every single person working there is a volunteer and the temple is run on voluntary donations.

At the Entrance to the Dining Hall

After being at the temple we went to see the border-crossing ceremony,  a ceremony that was created as an act of goodwill between India and Pakistan. The ceremony happens in the evening when the bus from India to Pakistan drives through. Each country has constructed stadium seating around the road at the boarder. There is an elaborate gate in the middle. We were fortunate to see the border-crossing on Republic Day which is like India’s Fourth of July, so the stadium on India’s side was jam-packed with flag waving Indians and Pakistan’s side was occupied by a handful of children and women covered in burkas. Before the cro-ssing there was a special program of music, dance, and singing from the region, which was fun to watch. The border-crossing ceremony itself was something like a changing of the guards and college football game’s half-time show. Whenever the military band from Pakistan started up and the music started drifting over the wall the Indians started their cheer for India. It was all a little chaotic and jovial. The gate between the two countries is left open long enough for both countries’ flags to be lowered in ceremonial fashion that involve- Indian soldiers doing some high-stepping shenanigans. For a moment people from both countries can get a glimpse of possibility between the two countries before the gate closes again. From the picture below you can see the gate in the back ground, and beyond lies Pakistan.

The Indian Crowd at the Boarder 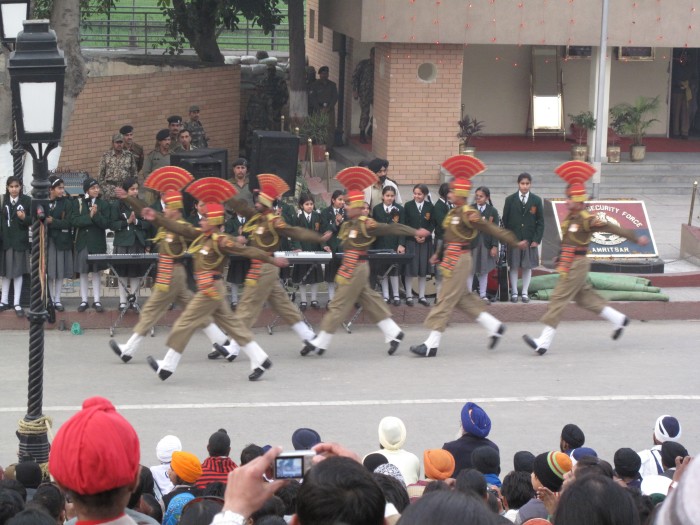 All in all, a very eventful first two days in India.