This Ganga Titi Bull lives at a Gaushala near Varanasi

Cows initially were considered sacred because they benefited people. They provided milk (and for some meat). Cows were the first tractor, which allowed agriculture to flourish and civilizations to grow. Their dung provided fertilizer, cooking fuel, building materials, and their urine and dung was (and still is) used in Ayurvedic medicine. It is a controversial issue for Hindus, but historical records show that cows were initially eaten by many tribes in India, but at some point, for both practical and spiritual purposes, it became taboo to eat the flesh of cows. Cows provided so many beneficial services for people that they were too valuable to kill and use for meat. Also, the Hindu faith promotes a vegetarian diet in order to live the spiritual path of “ahimsa” which means to “do no harm.” Ahimsa helps people in their quest to reach nirvana (where one’s soul is liberated from the cycle of life and death). In India cows are associated with and called “mother” because they give abundantly while receiving little in return, the same reason other natural phenomena, like the Ganges River, are considered holy. Cows’ milk also closely resembles human milk and many believe it is the only milk that can be substituted for human milk and produce a healthy human infant. Cows are not considered holy because Hindus think their mother will be reincarnated as a cow. It is a very odd notion to Indians that a human would be reincarnated as an animal (reincarnation usually works up, closer to enlightenment, and not down to our “animal” natures). For these reasons cows were considered the first form of wealth. The root of the word “coin” comes from the root word for cow and many early coins were embossed with images of cows. Cows may have been the first form of wealth, but as India changes so do people’s values and how they value and treat cows.

Street Cow with Sage Expression Outside of a Temple, Delhi

Like much of India, the sacred status of cows is a paradox. They are worshiped, but this doesn’t mean that cows enjoy excellent – or even adequate – welfare. Many cows are “homeless.” Families that can’t afford to keep an old milk cow or a male calf will usually set them free. These feral cows wanter the streets of cities and towns. Like everyone else in India, these cows live by their wits and chance. These free ranging cows often survive by eating trash, kitchen scraps, cardboard, newspaper, and plastic bags. Feral cows receive no treatment for parasites or disease, and the Western cows (bos tauras) like Holsteins, Brown Swiss, and Guernseys, suffer the worst from heat and disease. 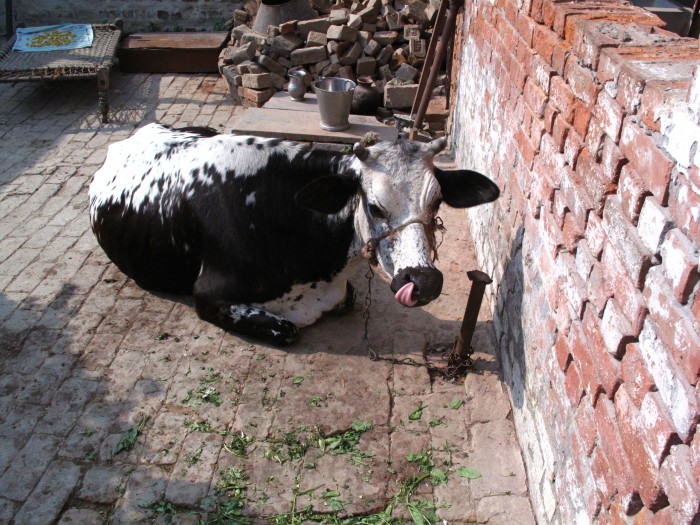 Cows that are kept for milk production are often kept in confinement, tied to a post or hut and taken out occasionally for grazing. These cows are often well fed with hay, bran, dried corn stalks, and barseem (fresh clover), but they do not enjoy the daily access to pasture that some cows in Europe and the United States receive. That said, dairy calves in India enjoy considerably better welfare than in the United States. Calves are not weaned from their mothers until they are nine months to a year old. Native Indian cows, also called zebu cattle (the cows with the humps) will not let down their milk if their calf is not present. This makes milking cows very labor intensive. Calves are are kept apart from their mothers until milking time, either by being tied up or kept in a pen with other calves until they return to their mothers at milking time. The cow is milked with her calf tied near her head, the calf  is then let free to suckle the last portion of milk from the teat. 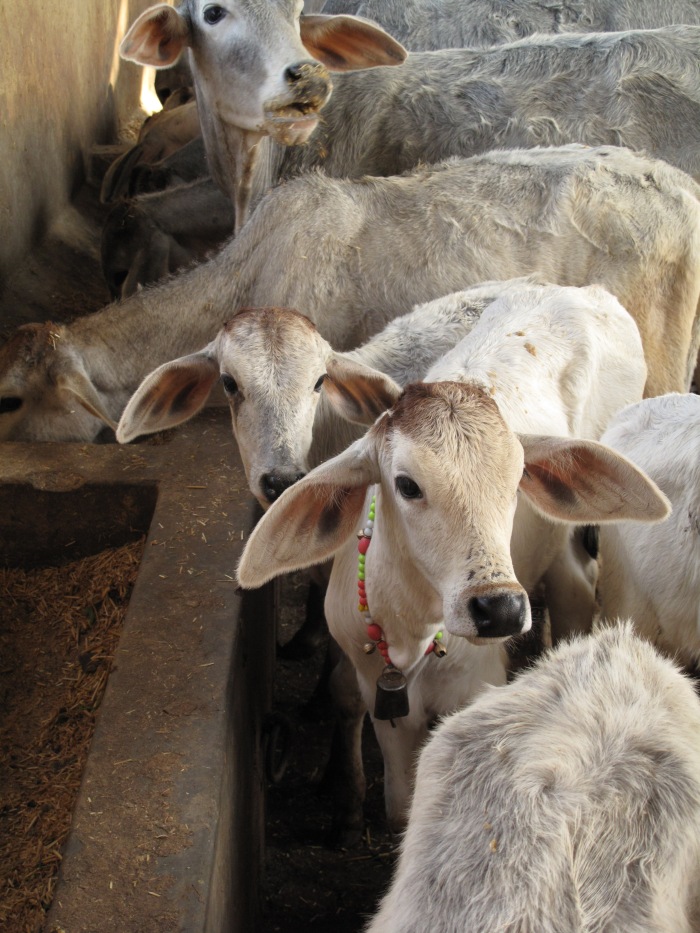 Cattle are not kept solely for milk. Some cattle are still used for manure, urine, and bullock power. Some tribes continue to travel as nomads, making a livelihood from their livestock and tending their herds of cows, goats, and/or sheep, but this is becoming increasingly rare. As India becomes more modern the role of cows in people’s lives is changing. Water buffalo are becoming more popular than cows as milch animals because they produce more milk with a higher fat content. Keeping a water buffalo is a better economical choice than keeping a cow. For this reason the population of cows in India is actually declining. Male cows that were once needed for bullock power to pull carts and plows are used less and less as motorized vehicles and tractors take their place. Bullock carts are still a presence in every town and city, but most male cows are let loose after they are weaned. It is considered acceptable to turn cows loose if you cannot afford to keep them. It is illegal to slaughter cattle in every state but West Bengal and Tamil Nadu (which are run by what some would call “anti-Hindu governments”), but I have been told that some male calves end up being used in the underground beef market. These cows end up at slaughter houses that process water buffalo and their meat sold to Muslims. The areas that have the largest industrial farms are the areas with the fewest cows. At the village I stayed at in Himachal Pradesh most villagers kept water buffalo for their own milk and cooking fuel needs. Chemical fertilizer was actually cheaper to buy than cow manure because the manure had to be transported from a large dairy. Some people are worried that as village life fades and people increase the use of water buffalo and Western cattle, some native Indian breeds of cattle will die out. In response to this issue, Swami Shankaracharya, who runs a large Gaushala (cow sanctuary) in Hosnagara (Karnataka State), took a well publicized 2000 km tour of India on a bullock cart to promote the welfare of cattle and the preservation of village life earlier this year.

While the role of the cow may be changing, India still has an enormous population of cattle. I have read that India has 1/3 of the world’s cattle on 3% of the earth’s surface. In “the cow belt,” the states of Gujarat, Rajasthan, Uttar Pradesh, and Madhya Pradesh, it is difficult to be outside without seeing a cow and devout Hindus still worship cows in the traditional manner. Most households keep a cow for religious purposes even if they also use water buffalo. Devout Hindus will make daily offerings to cows in the form of kitchen scraps or fresh clover and Hindu organizations, like the Silk Merchants of Varanasi or the Hare Krishna temples, run gaushalas – cow sanctuaries – where cows are taken in, treated for medical conditions, fed, and kept off the streets for the remainder of the cow’s life. Gaushalas are a recent phenomena and have been increasing in number in the last 60 years as various Hindu organizations take it upon themselves to provide for the welfare of unfortunate cows. Some organizations also use Gaushalas as research institutes where native breeds can be preserved and advancements can be made for dairy animals and where research is conducted on the best methods of composting manure. 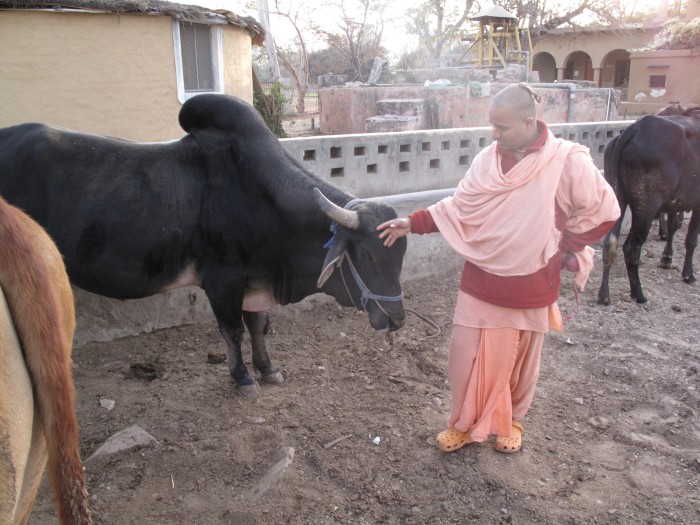 This is the Manager at ISKCON Hare Krishna Gaushala in Vrindavan with a Favored Cow.

In India it feels as if all periods of time exist at once. Bullock carts share the streets with bicycles and Mercedes. The cities build skyscrapers that house computer companies and call centers, while some villagers still carry water from the well to their huts. In the midst of so much change and chaos the cows still live along side humans and continue to wander the streets. Cows live closely alongside people and are still worshiped in religious ceremonies and their products continue to benefit us and make our lives easier in numerous ways, but many cows live lives of hardship. They were once worshipped because they give much while receiving little in return and in that respect the role of cattle in India remains timeless.