I covered a lot of ground the first week and a half of my trip, but for the last two weeks I have barely left Jag Therapy, the medical clinic in Mysore, where I have been learning about healing people with shiatsu massage, essential oils, yoga, and vegetarian nutrition. For those of you that know me, I am always trying to expand my knowledge of healthy living and eating. Sometimes I can sound like an encyclopedia of food facts as my Food Ethics students endured last semester. At Jag Therapy, I have discovered there is a lot more to learn, especially about the methods of food production in developing nations like India and how they affect public health. 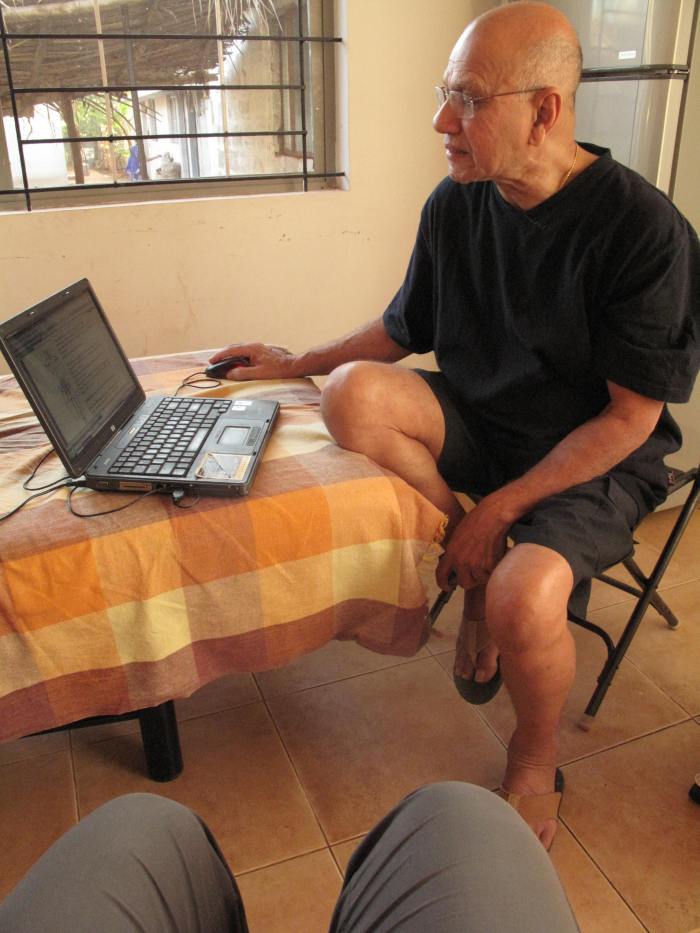 This is Jag, (KRI Jagedish). He is the head of the clinic and can diagnose a patient in less than thirty seconds, sometimes he tells a patient what kind of food they eat and lifestyle they live as soon as they walk through the door, just by looking at them. After ten minutes on the table, 99% of the patients leave pain free and with several instructions about what they should and should not be eating. Jag believes that the rapid increase in diabetes and Chrone’s disease (gluten allergy) are directly related to the increase in genetically modified and processed foods that are being consumed in India. This shift from a mainly whole food diet to a diet based on processed foods has become a growing public health problem. For example six percent of the population now have Chrone’s disease, doubling in just a few years. The population of India is around a billion people, so millions of people are developing new food allergies. Jag advises people to give up foods that have been genetically modified, processed, or contain toxins. This includes “polished” or white rice which is a processed food: dal (lentils) because it contains astronomical levels of the potent carcinogen auflotoxin; and milk which is often adulterated with chemicals that make it appear fresh. (More on milk at the end of the blog.) 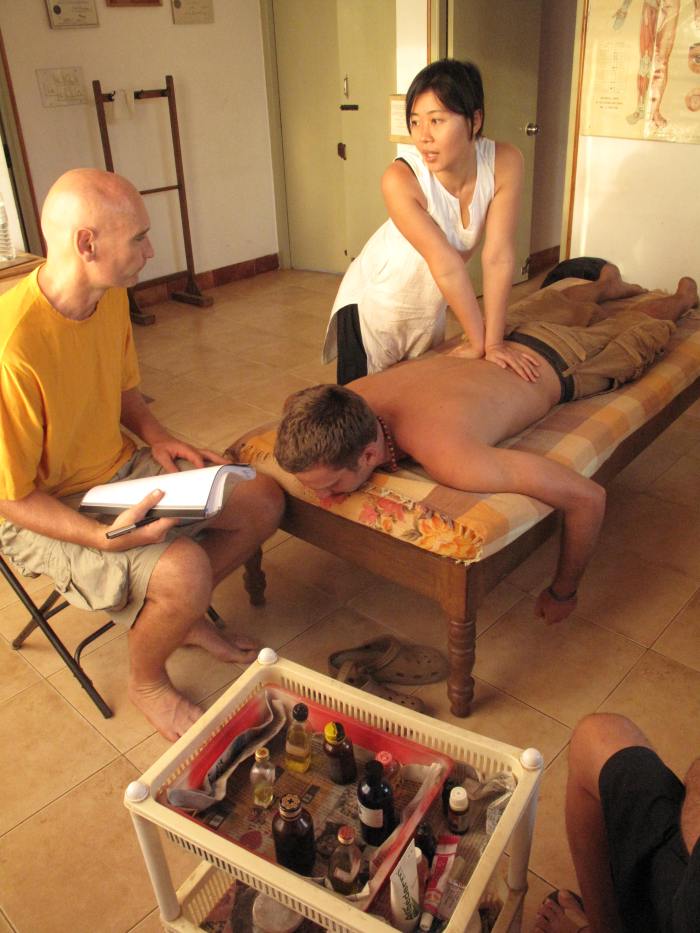 Steve (from Britain), Alecia (from Malaysia), and Steve from the US

There are a group of students from all over the world (Malaysia, Germany, France, Italy, England, and America) studying with Jag, and the atmosphere is very communal. Breakfast and lunch are shared meals and everyone helps cook. The food is also cooked according to Jag’s specifications. Meals include a lot of unpolished rice, a ton of vegetables and spices, and very little oil. It might sound austere, but the meals have been amazing and everyone comes to the table with a hearty appetite. I have especially enjoyed the luscious breakfasts of pineapple, papaya, banana, oranges, figs, nuts, raisins, coconut, and honey. This isn’t a diet, it is a lifestyle, but it is a lifestyle where you can eat like a horse and lose weight.

I have also enjoyed the ambiance of the clinic. The clinic occupies the same property as Jag’s house where he lives with his daughter’s family. He also keeps cows so he can make his own yogurt and cheese from good quality milk. The cow shed is right outside of his office and when you watch him treat patients you here the soft clinking of cow bells and his grandchildren playing outside and they often visit him while he treats patients. While I find it peaceful and a wonderful environment for healing, I’m not sure the patients appreciate three or four foreigners looking on while they are getting treated. The Hindu women are especially modest. I have been fascinated to watch people from all walks of life come here to get treated, including many foreigners who have come to Mysore to study Ashtanga Yoga and somehow can’t sustain a 90 minute back bending classes without hurting themselves.

The Cow Shed Next to the Clinic

It is disturbing to see the root problem of most illnesses stems from a diet of “traditional” Indian food, which once was a healthy diet, but because of the adulteration of the food supply is now making people sick. Most Indians are not aware of the changes occurring in the food system, but while at the clinic, the state of Karnataka where I am now, voted to ban genetically modified BT Eggplant from being grown in the state. There is a growing biodynamic and organic farming movement here and I’ve been lucky to visit some of these beautiful farms. For more information about the problems with India’s food supply, read Stollen Harvest, by Vinanda Shiva.

Jag has an uphill battle trying to educate every single patient about the problems with genetically modified organism and other foods, especially milk. He asks everyone to give up milk, because it is an unsanitary product in India and the milk they sell in shops is highly processed and sometimes adulterated with ingredients like caustic soda, uric acid, and palm oil. We visited the Nandini milk processing plant in Mysore to investigate the methods of milk production. Unlike the United States where milk is produced at large dairies and then shipped to a processing plant in refrigerated trucks, in India most milk comes from villagers. Each family only keeps a small number of cows and there is no way to regulate every farmer and know exactly what the cows are eating. If people can’t afford good quality feed they often let their cows forage for themselves. I’ve seen them eat newspaper, plastic bags, and other unsavory trash myself. I asked the manager at Nandini how many farmers supplied their milk and he said 85,000 between two regions. (85,000!) Most villagers use ox carts or motorcycles to bring their milk to a milk distribution center where it is collected by Nandini and then put in refrigerated trucks. In hot climates, like this one, it doesn’t take long for milk to curdle and this is where substances may be added to make the milk appear like it is fresh as it is waiting to be collected. Unfortunately, caustic soda, uric acid, and palm oil aren’t exactly healthy additives to milk.

At the processing plant we were assured that Nandini inspects all of its milk and has a clean product. There was no evidence that I could see that the milk at the processing plant was being adulterated. The milk being poured out of the trucks was being filtered and had no evidence of curdling. Once the milk is pumped out of the trucks it enters a maze of metal pipes that turn it into pasteurized and homogenized packet milk, curd, ghee, and lassi. The problems with milk are the problems of a changing India – too much trash (especially plastic) which cows unfortunately ingest, and the move from local to industrial. The best advice for Indians or Americans is to eat local food  preferably grown from people you know and cook it yourself. If you want to know more about these issues read In Defense of Food by Michael Pollen.