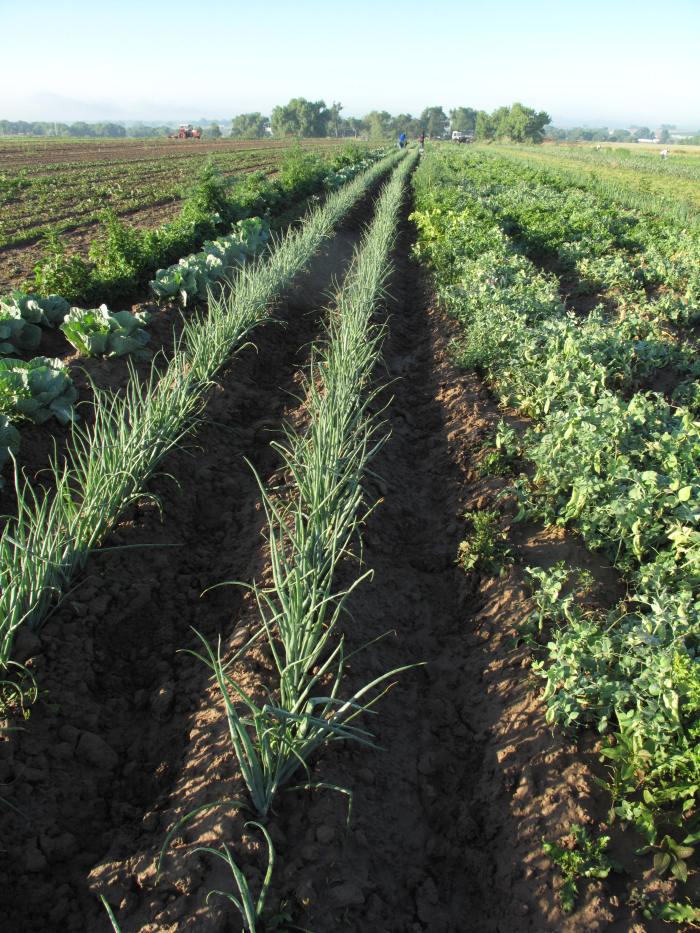 Two Years Ago this Beautiful Garden was the Cow Pasture

Two years ago Cresset’s vegetable field was a cow pasture. While the cows aren’t directly involved in growing vegetables, they are the reason the field has beautiful rich soil and their manure, urine, organs, and horns are used to make other biodynamic “preparations” which are used for pesticide, fertilizer, and to energize the field.

These Heirloom Tomatoes may have an Extra Special Glow

Rudolf Steiner, the founder of biodynamic agriculture, believed that industrial methods of chemical farming, with their use of synthetic nutrients and “mineral manures”, were spiritually dead substances. According to Steiner, not only had nutrient density of the food had declined, with the advent of industrial farming, but also the “energetic value” of the land and the food. This stemmed from Steiner’s belief that everything is simultaneously spirit and material (a philosophy called monism). As such the farm functions like an organism and any disease is a symptom of a problem with the greater whole. In biodynamic farming the health of the fields, livestock, and farmer are all taken into consideration in every decision. This wholistic attitude is sorely missing from today’s dominant farming paradigm, which is only about the input and output of calories, and not about health. 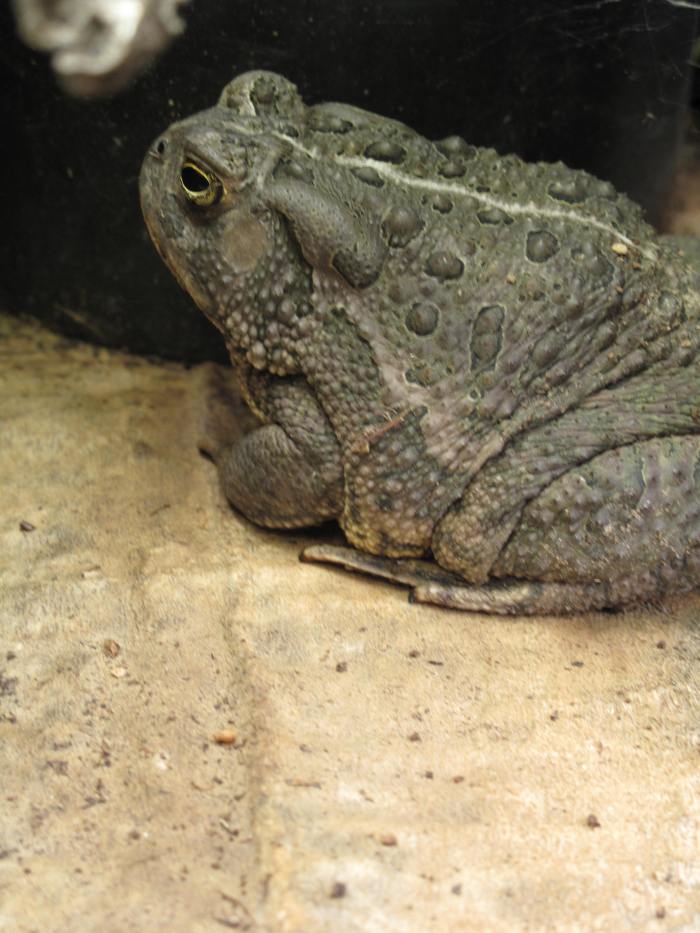 Amphibians, Like this Toad, are a Sign of a Healthy Ecosystem. Ursula would often Find me in Cresset’s Plant Nursery Stalking Toads with my Camera (When I Should have been of Working).

My work at Cresset was my first exposure to gardening and getting my hands dirty, so to speak. Even though my book-smarts about food are better than average and I have been involved in the local food movement in my community over the years, the actual act of growing food was a new experience and one I thoroughly enjoyed. 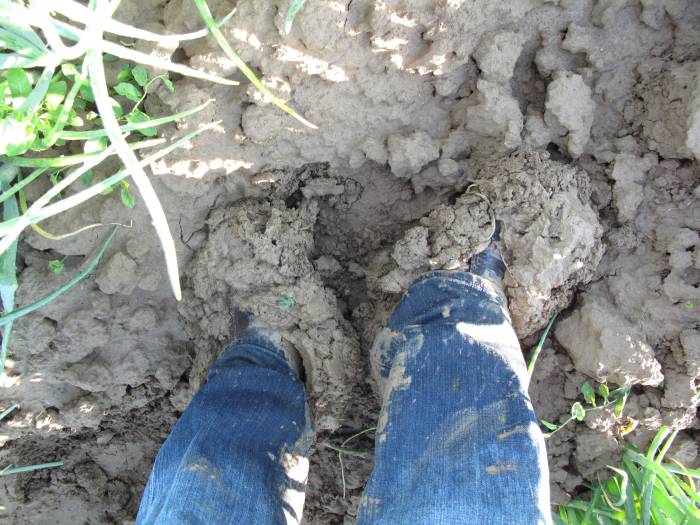 Getting More than Just my Hands Dirty

My first day on the job was a grey day one late April afternoon. The field was a large expanse of beige dirt with tiny shoots sprouting between the rows. My job was to break up the thick crust of soil the new onion shoots were trying to push through. Lawrence grabbed a metal tool that looked like a screw driver that had been bent over. This had a pointed tip with sharp edges and was used for breaking up soil, weeding, and harvesting root vegetables. Lawrence knelt down straddling the row of onions and showed us what to do. Using the tool he gently broke up the soil around the new shoots, with such love and tenderness he could have been changing a new born baby’s diaper. It was then I realized that the word “tender” came from farming – in essence “ to tend” something – and this required care and presence. When it was my turn, I realized that Lawrence had made the job look easy. You really had to pay attention to what you were doing to make sure to break up the soil without damaging the shoots, which were not much thicker than blades of grass. This “menial” task did take time, patience, and care. It made me realize that throughout history, farming was an act of love, not just a means of sustenance. 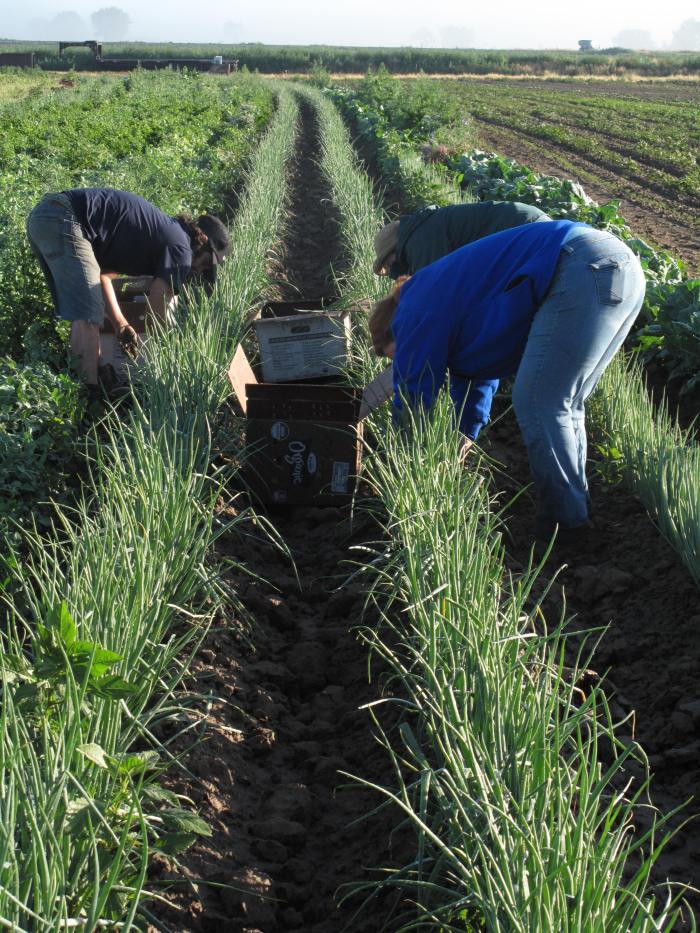 A Month-and-a-Half Later, Here we are Harvesting Spring Onions

The next month I learned about weeds, specifically bind weed, a plant that thrives in disturbed landscapes, like a freshly plowed field. It is called bind weed because its roots and tendrils wrap around a plant, squeezing the life out of it. Weeding was a multilayered process. We weeded the trays of newly sprouted plants on a weekly basis, as to ensure that when transferred to the field we wouldn’t be transplanting weeds as well. We also weeded the newly sprouted plants in the field, which took much more effort. One day a man named Jason and I were assigned the task of weeding a row of teeny-tiny beet shoots. The beets were only three inches long, just wisps of a plant. Extracting the vigorous roots of the bind weed took a lot of effort, so that we effectively removed the bind weed roots without damaging the plants. In places it was difficult to even find the beets underneath the mat of weedy leaves. The hours spent weeding made me think of things like, “Maybe, God loves bindweed best,” and “If we genetically engineered food to grow on bindweed then we’d never have to worry about world hunger.” Though it was tedious work, it was rewarding later in the summer when you saw the rows of lush and fragrant plants, abundant with food. 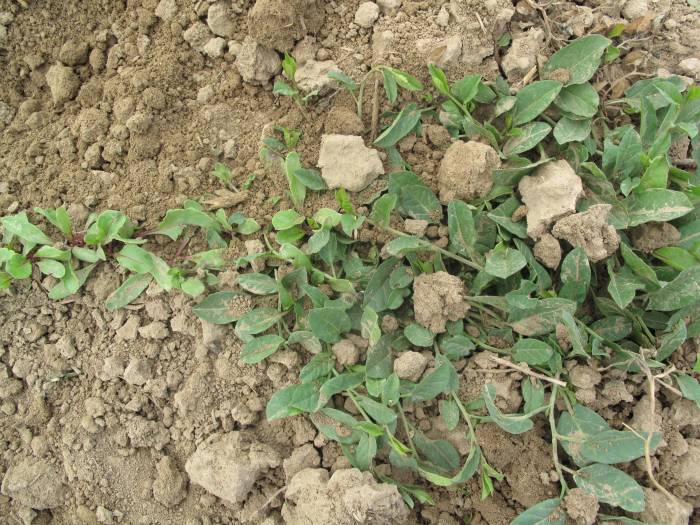 Beets on the Left – Bind Weed on the Right 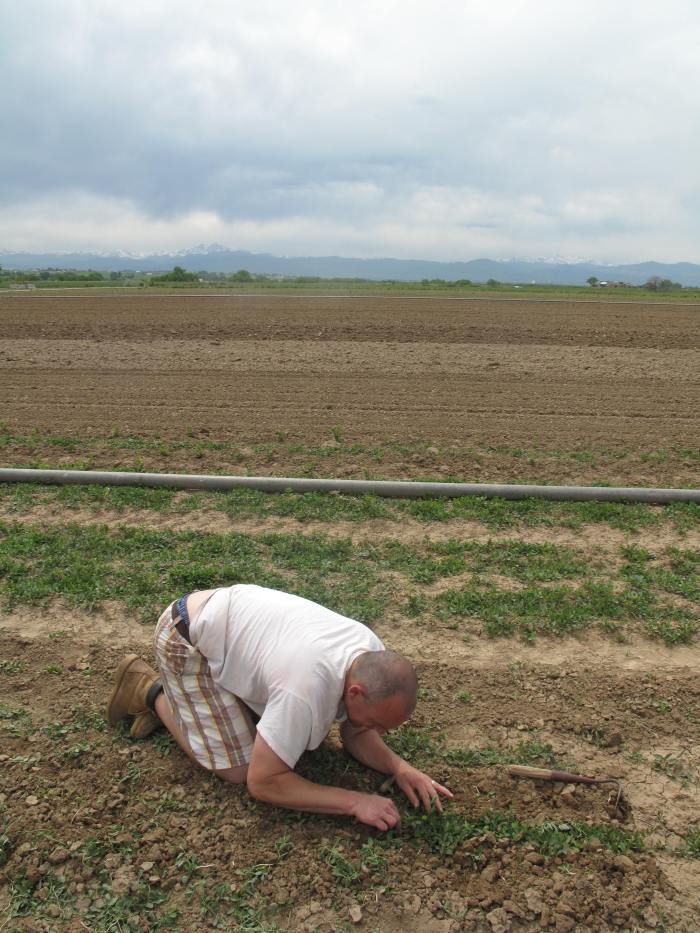 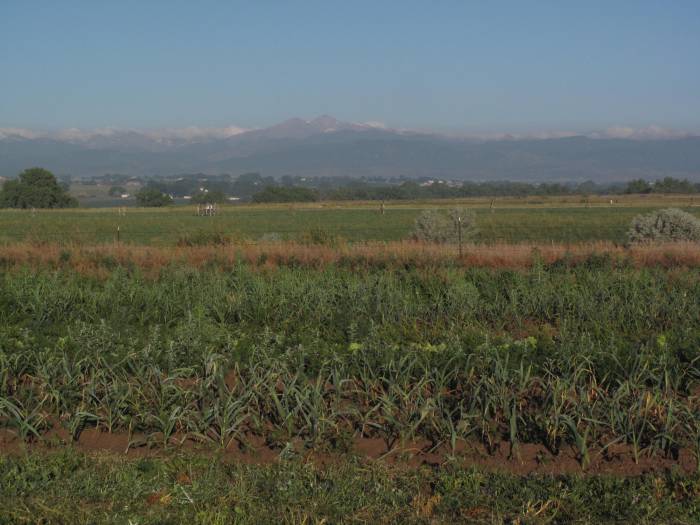 Only a Month after the ‘Weeding Beets’ Photo, the Field is Abundant. Garlic in Foreground

Because I only worked at the farm three hours a week, I was sheltered from the true nature of farming, which is truly a twenty-four hour endeavor, especially during the summer. Lawrence and Ursula have a steady stream of students (from grade school to college kids) coming to the farm throughout the year to tour their farm on field trips. The picture of this farming schedule was written on the chalkboard in the nursery and remained throughout the summer. Farming is hard work, and even though their tractor makes life easier, much of their farming is done by hand, with the help of their small troop of permanent staff and a steady stream of working share members like me. Day in and day out there are new problems and challenges in the barn and field, but I saw that farmers just create the right conditions for the food to grow – which the food does on its own largely unattended. And this to me is the miracle of food. 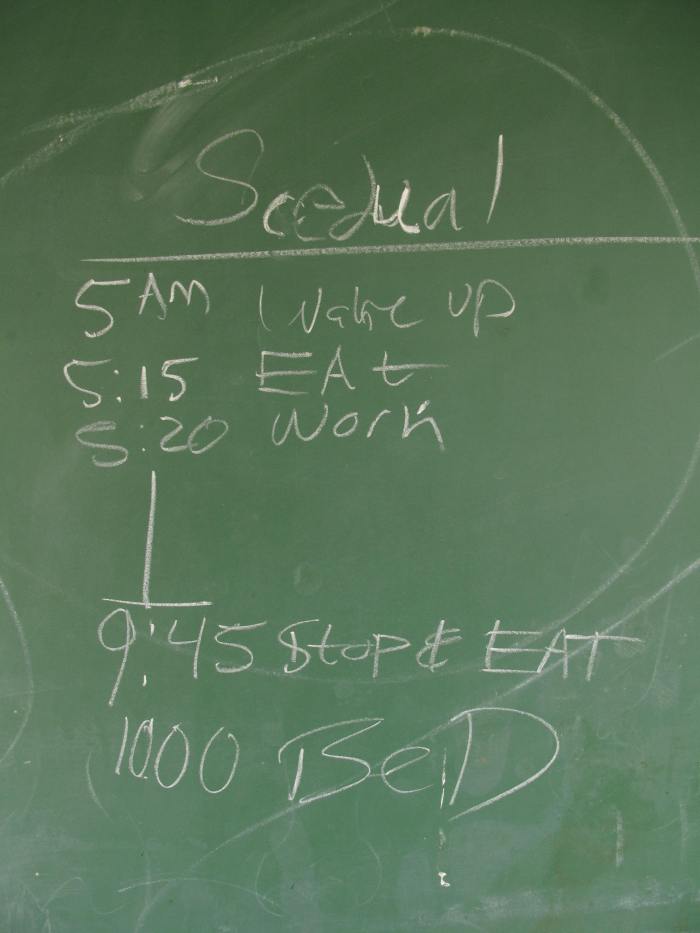 This Schedule, Written for one of the Young School Classes, Describes the 5 a.m. – 10 p.m. Farming Lifestyle

In August I harvested those very same beets that I had weeded. They were the size of billiard balls and nestled up to one another all down the row. As soon as I put my hand into the soil along-side a beet, the pressure made it spring out of the ground with ease, like it was all too happy to grow and be harvested just so I could eat it. I think it was the feel of farming that surprised me the most. I was always happy to be in the field, even if I had to get up before sunrise to be there, or even if I was feeling bored. And I always left the farm with an open-hearted relaxed feeling even if I was tired and sore. My fingernails may have been full of dirt, but I never felt “dirty”. 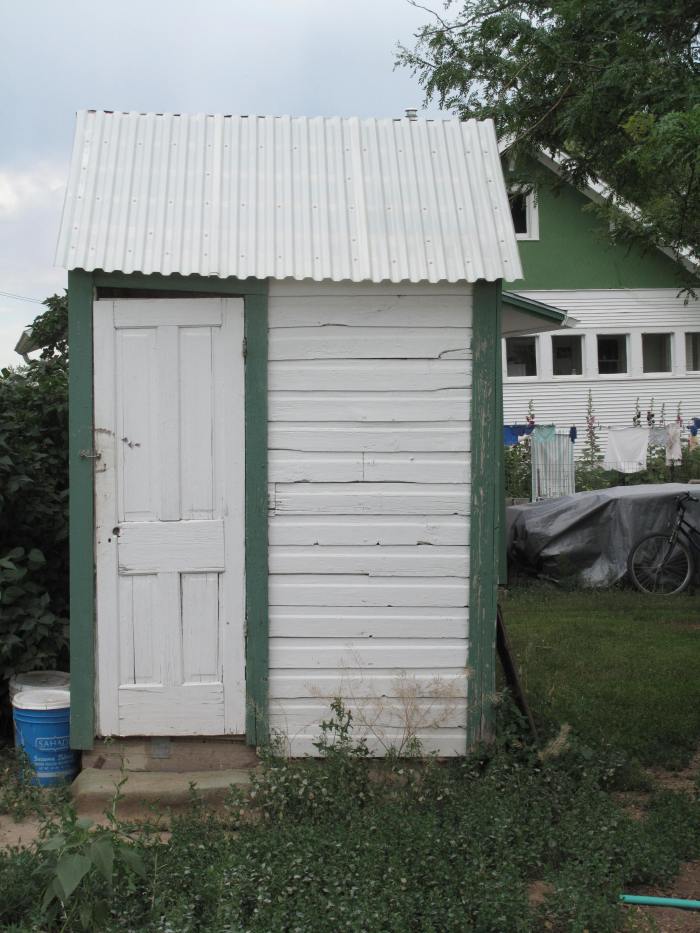 The Outhouse at Cresset is Actually a Composting Toilet. 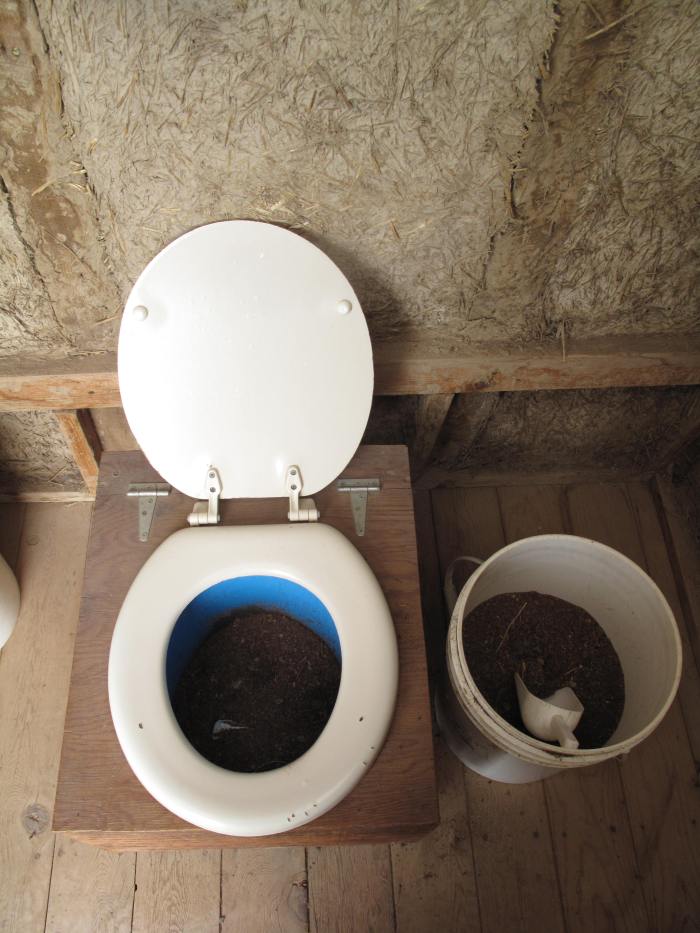 A Composting Toilet Uses Sawdust Instead of Water 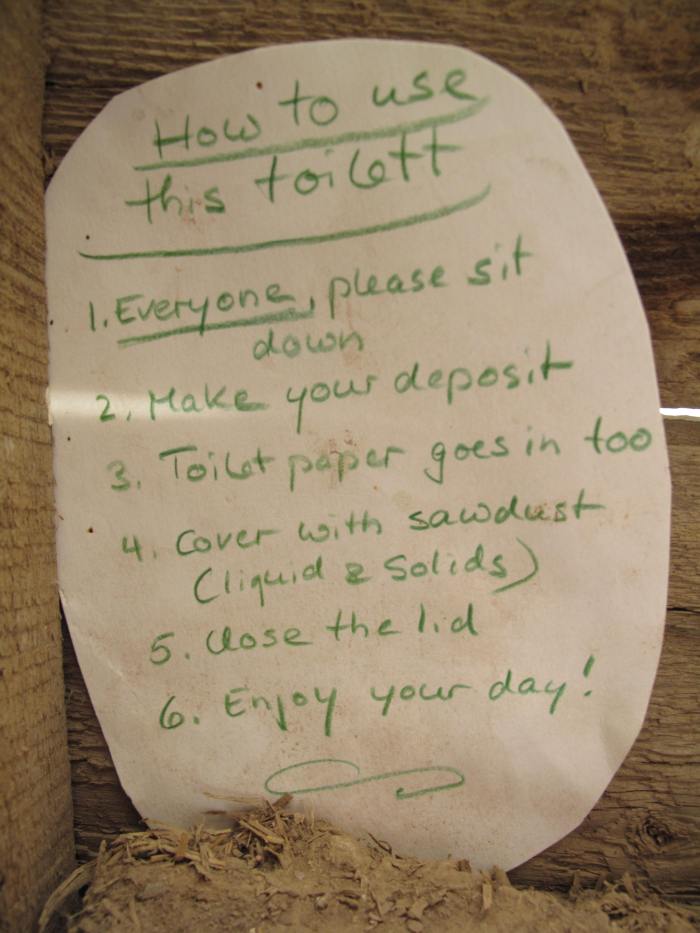 Composting Toilet Instructions. The “Humanure” is Spread on the Cow Pastures.

When another working share member and I watched an air plane crop dust a neighboring field with pesticide we realized that the gratifying feeling we felt being on the farm was rare. Many people that grow and harvest our food are migrant workers who are constantly exposed to a steady stream of chemicals throughout the growing cycle. In fact industrial farmers are required by OSHA to hand out literature to their workers about how to avoid harmful exposure to chemicals. These books resemble coloring books with line drawings that have simple text written in Spanish and English. One of the images is of field workers running from the field when an airplane is overhead, a toxic plume trailing behind it. I saw this image three or four years ago and I can’t forget it. We live in a society where toxic chemical  farming is considered “normal” and biodynamic farming is considered “alternative”. 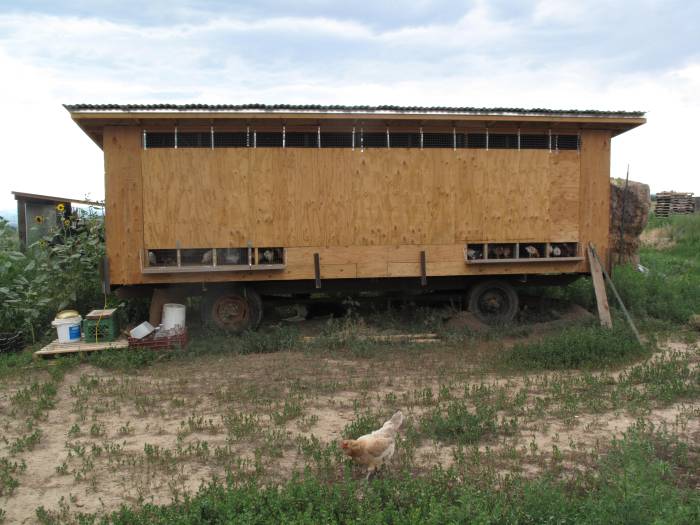 This Portable Chicken Coop is Parked in the Cow Pasture During the Summer. 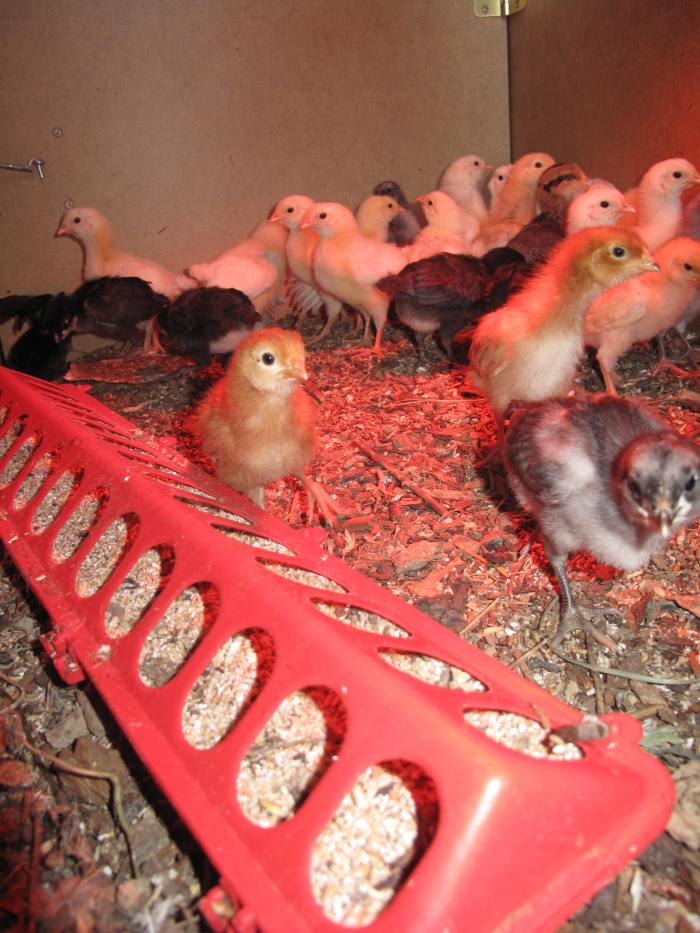 These Heirloom Breed Chicks Were Raised in the Portable Coop Under Heat Lamps. Their Box is Lined with Compost (Full of Bits of Plants) so they Learn to Scratch for Food. 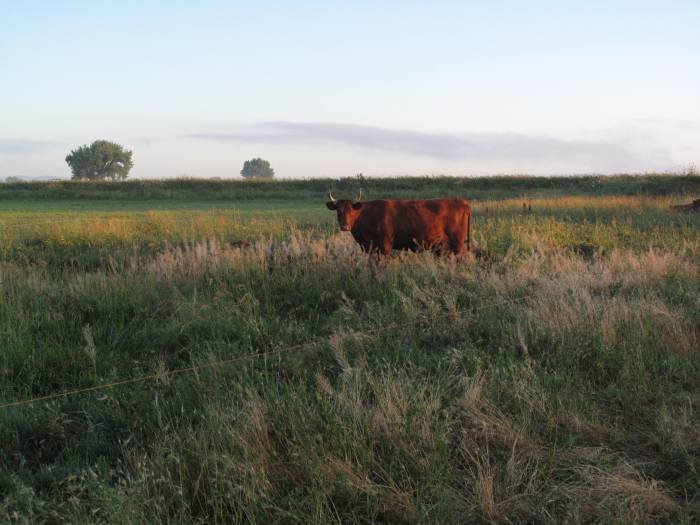 The Chickens Spend the Summer Living in the Cow Patures, Picking Bugs, Worms, and Maggots out of Cow Patties. Instead of Pesticides, these Chickens are an Avian Army that Pecks the Fields Clean and Keeps the Cows and Fields Healthy.

One criticism of biodynamic or organic farming is that it is too expensive and not a realistic solution to feeding the world. The response to this is complicated, and not something I am going to discuss in this post, but what I can say is that conventional farming is not working either. This year for the first time in history, the United States Department of Agriculture and the Department of Justice held joint public hearings so that they might better understand the “crisis in farming” that is beginning to happen in the United States. They held five hearings across the country for five different areas of food production. The fourth hearing about the livestock industry happened in my home town and one cattleman association called it “The most historic day in the history of the cattle industry.” The USDA Livestock Workshop and the issues surrounding it will be the topic of my next post.